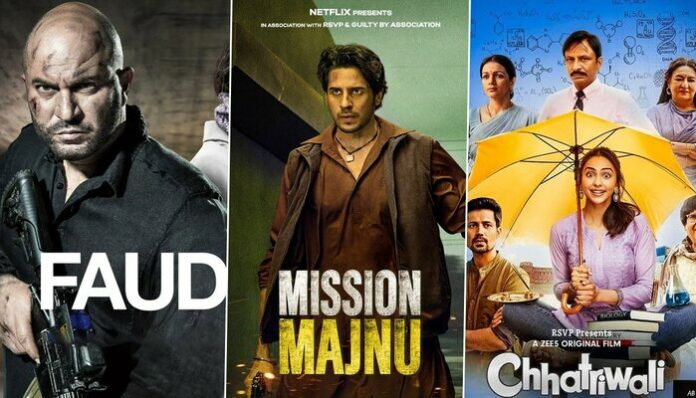 In the first half of this month, we saw some big OTT releases like Drishyam 2Hunters Season 2, Trial By Fire, Vikings Valhalla Season 2 even more. The entertainment spree will continue as there are some big releases lined up on OTT in the second half. This weekend is going to be great as two Bollywood films are making their direct OTT debut. Sidharth Malhotra and Rashmika Mandanna’s most awaited spy thriller Mission Majnu and Rakul Preet Singh’s social comedy chhatriwali Ready to premiere on Friday. Apart from these two big films, there are many interesting movies and shows releasing on January 20, 2023. Let’s have a look at the list.

Mission Majnu is a spy thriller film starring Sidharth Malhotra and Rashmika Mandanna in lead roles. The film is presented as the untold story of India’s biggest covert operation that took place before and during the Indo-Pakistani War of 1971.

chhatriwali Rakul Preet Singh is a social comedy starring Sumeet Vyas, Satish Kaushik, Dolly Ahluwalia and Rajesh Tailang. Set against the backdrop of Karnal, the film is about a jobless chemistry genius woman. She uses her skills to fight an important social taboo of educating youth about sex education. The film aims to promote male contraceptives and the importance of safe sex.

Created by Lior Raz and Avi Issakaroff, this popular Israeli series is based on real-life military experiences. It depicts a “two-sided tale of the Israeli–Palestinian conflict”. An undercover Israeli operative returns from retirement to hunt down a Palestinian terrorist he thought would be killed, setting in motion a chaotic chain of events.

rust_e is a South Korean sci-fi film that depicts a devastated Earth in the year 2220 that has become uninhabitable as a result of climate change. Amidst the mayhem, an internal struggle breaks out in a bunker built for human survival. Now, finding the technology to clone the famous mercenary Jang_ee into a scalable robot is key to winning the battle.

This six-part action-drama series revolves around a group of courtesans who attempt to escape the grasp of an infamous kingpin – but political corruption and blood ties make freedom a nearly impossible goal.

The series follows four youths from the slums of Hyderabad, who take up robbery for their livelihood. However, things take a turn for the worse when they get caught up in a high-profile case and are named the most-wanted criminals.

Where to watch: aha video

This action thriller film revolves around Jamunaa cab Driver, who finds himself in trouble when three contract killers come along for the ride. Will she be able to save herself from this dreadful situation?

So, this is the list of movies and shows coming on 20th January 2023 on OTT platform.