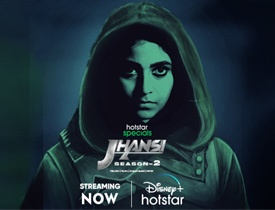 Disney Plus Hotstar has now brought season 2 of Jhansi web series. Starring actress Anjali in the lead role, the show is currently available on the OTT platform. Let’s find out how it is.

Part two begins right where part one ended. Jhansi aka Mahita (Anjali), who is an amnesiac, learns about her past from Ameesha (Nithu), who is part of Billu’s (Suresh Chakraborty) gang. Jhansi learns why her best friend Barbie (Chandni Choudhary) became a part of human trafficker Caleb’s (Raj Arjun) team. What is the reason for the enmity between Caleb and Jhansi? Why did Barbie shake hands with Caleb? Did Jhansi seek revenge on Caleb? The show has all the answers.

Anjali, once again as Jhansi, was brilliant in her role. While Anjali impressed with her stunts in season one, the actress was remarkable with her emotional portrayal in the second installment. The flashback episodes that followed during the first episode had good moments and Anjali’s performance enhanced the effect in some parts.

Chandni Chowdhary gets a decent role, and the actress pulls it off to perfection. His character was well written and had depth. The conflict point between the characters of Anjali and Chandni is neatly portrayed. Season two has been kept short, unlike the first season, and that becomes a major advantage.

The stunt sequences are well choreographed, which makes them a treat to watch. The script was engaging at times and had good interesting moments. The human trafficking element, though presented in a simplistic manner, is a relevant point that was discussed in the show. Other actors like Abiram Varma, Raj Arjun and Rameshwari Talluri were very good in their respective roles.

Having too many subplots limited the overall range of the show. There are subplots for most of the characters, some of which don’t really have any significance to the main plot. These subplots keep coming up intermittently, spoiling the flow. The way he is placed in the middle of crucial scenes will definitely leave the audience unnerved.

The good moments don’t last long, and whenever the show turns interesting, the makers come up with some unwanted scenes. Besides, the idea of ​​making two seasons doesn’t make much sense. Instead, the makers should have made it into a series with gripping storyline instead of coming up with two seasons.

What’s even more surprising here is that the story doesn’t end in season two, and we’re here again for another season. The climax is again lackluster, and the required hook point at the end lacks punch. After a point, when all the flashback episodes are over, the routine revenge factor comes into the picture, and it is not handled well.

Sricharan Pakala’s music is decent, and he has composed ‘Prem Ke Geet’ in the best way. Arvi’s cinematography is neat. Anthony’s editing is good this season. The production values ​​are reasonable, and the locations chosen are good.

Coming to director Thiru, he did below-par work with the series. The writing by Ganesh Karthik is no different. The Jhansi series would have definitely reached a higher level if the writing was water-tight without the many unwanted flashback parts. The show also gives the feeling that it has dragged on for another season without a strong cliffhanger. The premise about human trafficking is interesting, but a good screenplay around the core concept would have done wonders.

Overall, Jhansi season two clicks in certain parts. Anjali is the soul of the series, and she is supported by the other cast. There are some exciting moments, but the lack of a compelling story makes the second installment strictly okay to watch this weekend.

Reviewed by the 123telugu team

Articles that may interest you: