Roomies in Dreamland Review: A parody to binge upon


‘Roomies in Dreamland’ immediately anchor you in the crux. Not wasting in the loops to introduce. Three roommates in real and in reel life, Rituraj, Vichitra, and Sampark, propel each other to carry out their dreams. Rituraj, wild with his dreams of becoming an actor, lands himself in some B-grade screenplays. As he heralds the joy of it, he gets two of his enduring roomies, Vichitra (who’s in frenzied covet of adventure) and Sampark (the kind-hearted soul; so much that he deemed of financing Rituraj to execute his dreams), to truss him on his voyage of becoming an actor.

More unexpectedly, they did! We don’t know if you have ever been into such possessions of becoming a star or an actor, but if you have, you would know how undeniably tumultuous and rugged the pathway is. But thanks to Akhil Sachdeva that how brilliantly he parodied it in its entirety to give the viewers a timeless laugh.

Yes, it’s a parody to binge upon! But to understand between the lines, we bet you will have to watch it a second time. Because at first glance, you might feel the series has been made in a void and the makers were high, but Roomies in Dreamland summons your patience, people! Because these four-episode series, enveloped within 38 minutes (maximum), have so much to tell but on a crisp note!

Why Parody? It’s how Rituraj tells Robin to throw a monologue before killing them in Khoonkhar Qaidi, and Robin executes an over-dramatic long note. Also, then, how it ends with the usual showcase of a typical Indian film, ‘A voice of God’ that follows with a bird’s-eye view shot, panning onto the characters who are set on a different journey in life and the antagonist in jail for ‘8 days’. It’s when Rituraj talks about the ‘struggles’ in a life of an actor after he realised he got the role of a ‘beggar’ who just leads the police to let know where the ‘murder’ is going to happen. Roomies in Dreamland rotates around the ‘wildest dreams’ that often become chaotic in all their loopholes.

However, the mini-web series also pick up on the other aspects. Friendship, love, financial crisis and different heavy societal dimensions. But what we loved was how it spectacularly rounded off. The series wins the cherry on the top with its too-believable setting. A rustic dirty 1BHK dilapidated room where the roomies stay together. A perfect flashback happening to give the ideal get-up to superstar Robin.

With the perfect ensemble cast of Swagger Sharma, Nikhil Vijay, Badri Chavan, and Jaaved Jaffrey, it’s a given that it would be a one-of-a-kind experience to witness on the screen. Also, for the last straw, the series ends with a classic dance showcase by Jaaved Jaffrey.

So, what are you waiting for? Get your screens on set and watch this piece of hilarity on Amazon miniTv only. 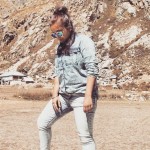 
An ardent writer with a cinephile heart, who likes to theorise every screenplay beyond roots. When not writing, she can be seen scrutinizing books and trekking in the mountains.